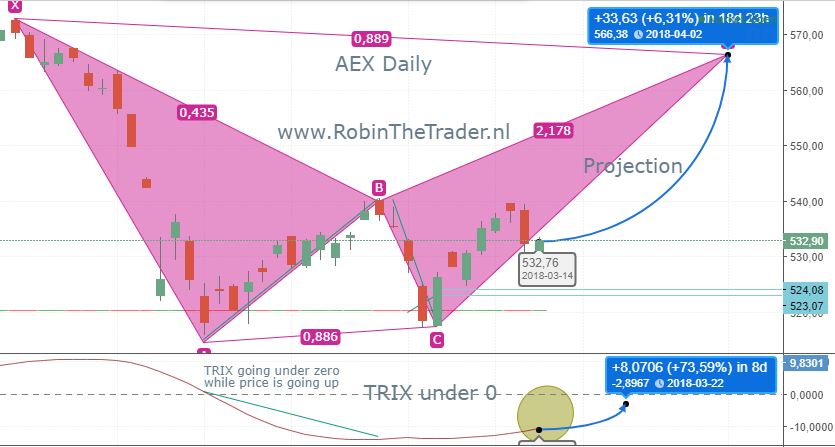 Since the start of RobinTheTrader 2.0, it looked like the AEX was getting quite some hits down. Several indicators were getting under their middle line, the AEX graph itself was imploding and lost over 20 points in less than 3 days and if that wasn't bad enough, the recovery afterwards only reached 540. There were some who were talking about a dead cat bounce, that the AEX would drop after it reached the 540 and would drop even further than the first time.

They were right, for some part. The AEX indeed dropped after 540, but what happened in that drop opened the door for this beautiful harmonic pattern called a Bat. This Bat was valid from day 1. Big drop, slight recovery, another drop. Everytime exactly hitting the needed Fibo levels.

What is next? The TRIX levels indicating a divergence between legs A and B. TRIX going down while AEX is rising. TRIX is not really getting up with the AEX rising as we speak. We are expecting the TRIX to get above its zero point level again. AEX needs to get rising for the TRIX to do so. AEX could get back to around 560 somewhere. Will it be april? Who knows.. But it will reach higher than it does now. And that will be in april!

Find us on BUX!